As I prepare to send my daughter off to college, I can not help but think about the dangers she may face. All you have to do is search for rapes on college campuses to be horrified.

When it comes to crime statistics, they vary from campus to campus, but there is one crime that is commonly reported, and that is rape. You don’t have to look hard to realize that this is a huge problem, and crimes can take place anywhere. In school, determining common situations in which the crime commonly occurs is a way to prevent this crime, and following a self-defense 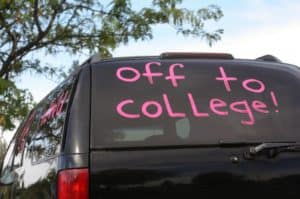 guide is a good idea too.

People tend to be more prone to student rape due to being involved in various activities, such as going back home when it’s late at night after you have been to the library or studying at a friend’s house. Not only that, but there’s a good chance you’ll be going to different social gatherings and parties while at college. This means you’ll meet new people, and you when it comes to your actions, you have to be cautious.

One of the things you should do is walk with a large group if you are walking around your college’s campus or when heading to the library. Make sure your friends are with you when you walk back to your dorm room, and if it’s late at night, always have someone with you. If you are in a group or with someone else, an attacker will have second thoughts and they will likely not be able to carry out his plan.

Avoid dark places and secluded places if you’re alone. This is because you could end up being cornered, but if you cannot avoid going to dark places or secluded areas alone, such as if you have to go to the parking lot, then walk fast. Also, be aware of your surroundings because this will allow you to see if someone is following you.

Having a self-defense device is a good idea too, and stung guns and pepper spray are good choices. Just make sure you find out if such devices are allowed on your campus, and if it is, then buy a cheap stun gun or similar devices. They can serve as protection for you and you can bring them virtually anywhere you go. If someone tries to harm you, then you can use the device to defend yourself.

Also, control your actions when you are around people in social gatherings and occasions of that nature, because drinking too much alcohol has consequences. For example, if you drink too much, then you could easily be taken advantage of by someone you just met or by someone you don’t even know at all. Either drink in moderate amounts or don’t drink at all. There is something called Drink Guard and you should consider getting it because it is a date rape drug detector.

Finally, only stick with people you actually know and people who you can trust. Before you trust new people you have just met, make sure you get to know them better because it’s not really a good idea to trust strangers right off the bat. Outsiders are not the only ones who can commit crimes against people, as other college students can do it too.

Crime can and does happen at college campuses, and this is a fact. It’s important to be aware of your surroundings and be alert, and you need to be responsible for your actions. Equipping yourself with pepper spray is also a good idea. Rape cases can occur anywhere and this is why it’s good to be prepared and you should know how to defend yourself.