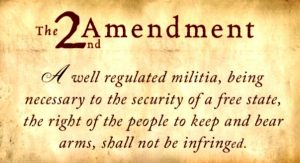 Better late than never, but I wanted to make sure I posted this and get some reactions.  Back in March The Supreme Court made a very important ruling as it pertains to the right to Protect oneself and more directly the rights to carry a stun gun.  Without getting in the specifics, I am including a clip and link below of the full article, The courts reversed a states ruling on a woman that had been arrested for protecting herself with a stun gun.

You won’t believe the antiquated argument the Massachusetts courts used to justify their law and why they felt that they were not violating the  constitution and our right to bear arms.

The justices ruled that the state court’s reasons for upholding the law conflicted with the Supreme Court’s 2008 decision upholding the right to bear arms for self-defense — a ruling written by the late Justice Antonin Scalia in 2008.

The challenge, filed by a woman who was arrested for carrying the weapon in her purse for protection, now gets new life. But rather than hearing the case themselves and potentially striking down the ban, the justices sent it back to the state’s Supreme Judicial Court.

They reasoned that their own landmark decisions in District of Columbia v. Heller and McDonald v. Chicago were meant to protect even firearms “that were not in existence at the time of the founding.” However, they stopped short of a blanket endorsement of stun guns.

That did not satisfy Justices Samuel Alito and Clarence Thomas, who complained in a 10-page concurrence that the court’s “grudging” decision to send the case back may not be enough to save Jaime Caetano and citizens like her “who must defend themselves because the state will not.”

“If the fundamental right of self-defense does not protect Caetano, then the safety of all Americans is left to the mercy of state authorities who may be more concerned about disarming the people than about keeping them safe,” Alito wrote.  Clip from USA today

This is a huge step forward in protecting our rights, I look forward to seeing how the lower courts will react to this ruling.  Massachusetts isn’t the only state with Laws about stun guns, so the implications on how this will impact your rights on the positive side are BIG.

For those who would like the see the complete court ruling, Click here: for a PDF of the courts response.